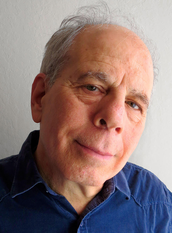 Warren Lehrer is a writer/artist known as a pioneer of visual literature and design authorship. Awards include: The Brendan Gill Prize, Innovative Use of Archives Award, International Book Award for Best New Fiction, three AIGA Book Awards, grants and fellowships from the NEA, NYSCA, NYFA, Rockefeller, Ford, and Greenwall Foundations. He is a 2016 Honoree of the Center for Book Arts and a 2019 laureate of the Ladislav Sutnar Prize. His books are in many collections including MoMA, The Getty Museum, and Georges Pompidou Centre. Lehrer is a professor at SUNY Purchase, founding faculty member of SVA’s Designer As Author MFA program, and co-founder of EarSay, a non-profit arts organization in Queens, NY.

“In Warren Lehrer’s books, words take on thought’s very form, bringing sensory experience to the reader as directly as ink on paper can allow… [Once] considered too far ahead of his time… Now the times are beginning to catch up to him.”
​Julie Lasky The New York Times Book Review