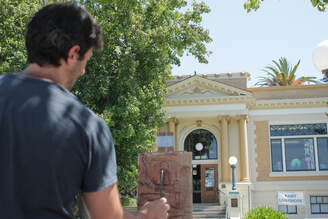 BIOGRAPHY
Kristian Matthews was born in 1978 in Livionia, MI.  As a young child, he showed artistic potential as he regularly entered and won coloring contests.  His artistic interests shifted toward creating humorous comic-style drawings as he progressed through his teenage years.  It wasn't until his first year at a community college that he began to explore the world of fine art, beginning with a class that focused on drawing from observation.  It soon became apparent that he had a knack for realistic, observation-based drawing, and he decided not long after to pursue a career in fine art.  In 2005, he began attending The School of the Art Institute of Chicago where he concentrated his efforts on painting the human figure.  After graduating with a Bachelor of Fine Arts degree and suddenly finding himself without a model to paint, he decided to give plein air painting a shot.  Since then, he has created the vast majority of his art outdoors.
​
Kristian loves to capture the effects of light with paint.  He is drawn to dramatic lighting and enjoys finding the beauty in everyday scenes.

Artist Statement
When I set out to create a painting, my goal is always the same: to create the most beautiful image possible given the possibilities of the scene that lies before me.  That generally requires some manipulation of the scene, but I try to stay true to what I see while focusing on capturing the essentials that give the scene or subject its essence.  For me this means editing out what is not important and enhancing what is, while not getting carried away with details.  It also means to embrace the nature of oil paint by not overly blending and by creating textural variety.


I paint a large variety of subjects, from cityscapes to the figure, but to me the subject is largely irrelevant, as all I am really painting are the forms that are revealed by the light.  Because of this, I enjoy painting literally anything as long as the light is interesting to me.  Additionally, I work from direct observation only, as I feel the need to see subtle color and value variations and to translate three dimensions into two.