a reading for the world-wide 100 Thousand Poets for Change 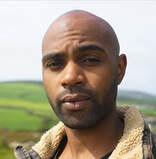 Rohan DaCosta is a multi-disciplinary artist from the city of Chicago, working primarily through photography, writing, and song. Rohan explores complex dilemmas, and frequencies found in lovers, in families, in ecosystems, and in places. His book of photography, poetry, and song, The Edge of Fruitvale, was published by Nomadic Press on April 28, 2018, and has been nominated for a California Book Award, a Pushcart Prize, and a CLMP Firecracker Award.  His photography has been featured at The Flight Deck Gallery as a solo exhibition titled Ordinary People (2018). His photography has also been featured at Root Division Gallery as part of a group exhibition titled Let Me Be a Witness (2018). In 2018, he was awarded the Individual Artist Funding Grant by the City of Oakland for his arts exhibition, Trap : Trauma : Transformation (April 9 – May 18). 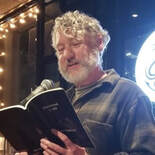 Tobey Kaplan, originally from New York City, with degrees from Syracuse and San Francisco State Universities, has been teaching in the San Francisco Bay Area for forty years.  An active member of California Poets in the Schools and Associated Writing Programs,  Ms. Kaplan has given readings, workshops and presentations throughout the country regarding creative process, literacy and social change. For several years, she worked with the Native TANF program/Washoe Tribe to coordinate a range of educational services and identify career building programs for the Native American community in Alameda County. 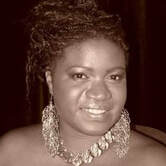 Aqueila M. Lewis-Ross is a multi-talented, award-winning Bay Area Native well-versed in singing, poetry/spoken word, and journalism. Aqueila has studied and performed throughout the United States, Europe, Japan, and is a graduate of Napa Valley College and University of California, Berkeley. Her book of poetry, Stop Hurting and Dance, published by Pochino Press, is a collection of stories overcoming fear, oppression, gentrification, and police brutality; she honors what it means to live with resilience, love and prosperity.  She holds the titles of Ms. Oakland Plus America 2014, SF Raw Performing Artist of the Year 2015, and was an Oakland Voices-KALW Community Journalist awardee in 2016 and Greater Bay Area Journalism Awardee in 2017.  Visit Aqueila's at Facebook. 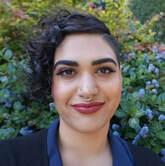 Dena Rod is a writer, editor, and poet based in the Bay Area. They run the RADAR Productions  weblog and are the Assistant Creative Nonfiction Editor at homology lit. They were selected for RADAR Productions’ Show Us Your Spines Residency, Kearny Street Workshop’s Interdisciplinary Writer’s Lab, and Winter Tangerine’s Summer Writer’s Workshop. Through creative nonfiction essays and poetry, Dena works to illuminate their diasporic experiences of Iranian American heritage and queer identity, combating negative stereotypes of their intersecting identities in the mainstream media
​ 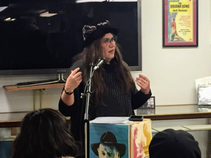 ​Kimi Sugioka is a poet, songwriter and educator who tries to confront and illuminate the cognitive dissonance she experiences at every turn in society, politics and media. She has an MFA from The Jack Kerouac School of Disembodied Poetics. Publications include various anthologies: Standing Strong! Fillmore & Japantown and Endangered Species, Enduring Values, and Civil Liberties United. She has published a book of poetry, The Language of Birds, and, soon to be published, Wile & Wing. 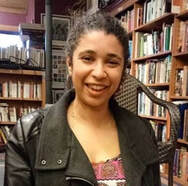 ​Maurisa Thompson was born and raised in San Francisco, and is a proud alum of June Jordan’s Poetry for the People.  A poet and educator, she is a graduate of UC Riverside’s MFA program and is currently teaching English at John O’Connell High School in San Francisco. Her poetry has appeared or is forthcoming in The Pedestal Magazine, The Black Scholar, La Bloga, Cosmonauts Avenue, the anthologies A Feather Floating on the Water: Poems for Our Children and En Vuelo: In Celebration of el Tecolote, and The Haight-Ashbury Journal, which nominated her for a Pushcart Prize.  She has worked with arts organizations including Richmond's RAW Talent and the Gluck Fellowship program at UC Riverside.  She is currently working on her first poetry manuscript that combines history and folklore with her grandparents’ stories from Louisiana and San Francisco, and a middle-grade novel exploring police brutality, which won the support of a Walter Grant from We Need Diverse Books.