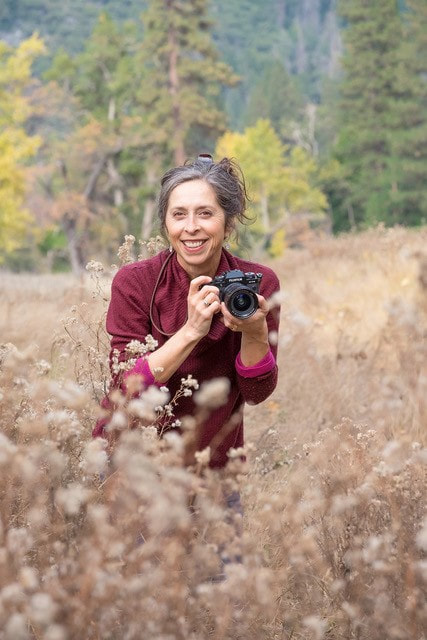 Growing up on the coast of Northern California inspired within Melina a profound respect for the beauty and healing power of Nature. As a constant ally and muse, it awoke something deep within her: a passion to teach people how aligning themselves with the natural world could elevate their sense of well-being, joy, and belonging. This has not only informed her capacities as a teacher of yoga and seasonal wellness but as a photographer as well.

​Meza was fortunate to be exposed to some extraordinary photography at an early age. It was not uncommon for restaurants and stores in the town where she grew up to have large prints of famous Ansel Adams or Brett Weston images on the walls. They made a striking impression upon her: She saw how photography could elevate nature’s beauty, transforming the mundane into poetic works of art. Given this, she wasn’t surprised that when she discovered her first 35mm camera that she fell in love immediately.

She spent two years in college focusing on photography studies, discovering the works of artists who profoundly inspired her artistic vision. In addition to Adams and Weston, Meza’s early influences included Robert Mapplethorpe, Sebastião Salgado, and Imogen Cunningham, all of whom opened her eyes to seeing the sensual nature of the world in complex shades of black and white, without the use of color. Their exquisite use of light, expression, and intimate connection to subject continues to inspire her today.

Upon purchasing her first iPhone camera, she began exploring picture making with the yogic concepts of dedicated practice and non-attachment as her companions. In 2012, she embarked upon a Photo of the Day project through which she challenged herself to take and post one photo on Facebook each day. What started out as a commitment to taking a photo each day, turned into a six-year project that became a daily ritual of creativity and connection with the world around her. At first, Meza thought she was going out to take a photo—but in the end it was more like the photo found her. It was then that she fully realized that the creative process can’t be forced; when in sync with her daily flow, creativity seemed to find its own way through her.

Eight year ago, Meza embarked upon an evolutionary shift in her photographic style when she began mentoring with Tony Rizzuto from Photographer’s Breakthrough, who introduced her to the Fuji camera and in-camera multiple exposures. The ethereal, layered luminosity of her images are attained by a meditative process of discovery. By playing with motion, texture, and light, she often changes something recognizable into an abstract photograph, one in which there is room for the viewer to create their own story or interpretation of what they see.

Since 2012 she’s been showing her work at yoga studios, galleries, and in catalogs for retreat centers including Esalen Institute and Breitenbush Hot Springs. In 2016, she created a studio gallery in her home in Oakland, California, where she has been hosting annual art exhibits ever since. It is a space to not only to show her own art but to also feature the work of others, to celebrate other artists and the local arts community.

Through a camera’s lens, Meza partners with Nature to co-create beauty, images that offer transportive experiences that are vivid and yet serene, full of surprises as well as approachable, immersive yet comforting, and mood-shifting while also being thought-provoking. Her creative alliance with Nature—the place in which she finds joy, alignment, and the deepest sense of belonging—leaves her grateful and in awe each and every day.