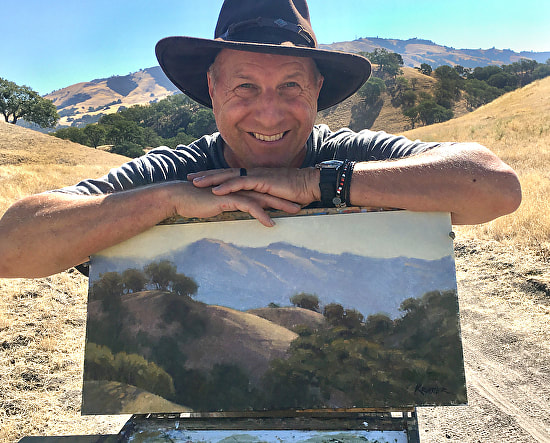 "Paint long enough and it becomes obvious as to which artists are truly connected to their work. Those who are devoted to quality and continuous improvement. Paul Kratter is one such artist. His dedication to working from direct observation, connection to fellow artists and focus on hard work have put him at the top of his game." Matt Smith, American artist.

Paul Kratter's paintings embody the light, atmosphere, and emotion that only an accomplished artist can convey. Paul, along with many experienced fine art painters comes from an illustration background that instills strong drawing and design skills and a robust belief in graphic shapes and storytelling. This is prevalent in Paul's work as a skillful and accomplished landscape artist.

As a young child, Paul loved to draw. It was an entry into the San Francisco Chronicle's weekly drawing contest and a subsequent win that verified he was an artist. His prize, a ticket to the San Francisco Zoo inspired his love for animals and ignited his lifelong passion to represent them in his art.

After graduating from the College of San Mateo where he received his Associate of Arts degree in Graphic Arts, he enrolled in the Art Center College of Design in Pasadena, one of the best commercial art schools in the country. Majoring in Illustration. Drawing, design, and composition along with editorial concepts formed the basis of his studies. Paul started dating his wife, Tia Wallace at school and they married soon after. Both Paul and Tia graduated from the Art Center with a BA of Fine Arts.
Just out of college, Paul started freelancing where he landed exciting jobs working with the NFL properties in Los Angeles who produced all the magazines, books, and publications for the entire NFL. Working with David Boss, the best Art Director he ever worked with, Paul completed over 100 illustrations including six covers of Game DayMagazine.

The highlight for Paul was illustrating a gatefold illustration of the San Francisco 49ers Super Bowl victory over the Cincinnati Bengals in 1981. He also freelanced for a variety of baseball teams including the Los Angeles Dodgers and his favorite, the San Francisco Giants. Sporting themes were always present over his 24 years as an illustrator.

Everything changed in 2002 when Paul attended the very first Sonoma Plein Air event created by artist Keith Wicks and Judy Vadaz of Vadaz Vineyards. His wife, Tia was one of the artist participants. Coming from a background where weeks could be spent on a specific piece, he was taken by the immediacy and freshness of the work. The Artists captured specific moments in time, painting the dramatic light of the day. This deeply resonated with him. Other artists pointed out that chasing the light was impossible and to stick with a plan. This seemed so simple but Paul couldn't wait to experiment with a new media approach he had never considered. The whole experience moved him so much that the next day he went to the art store and bought a set of oils. This event started his career as a landscape painter and he has never looked back.